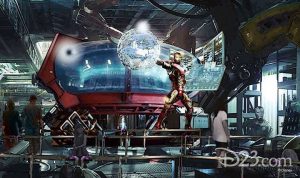 Since then, multiple concept drawings have been released by Disneyland Paris. Through those, we learned that, although the roller coaster layout will stay the same, the conversion to an Iron Man Roller Coaster will be very thorough. Not only the interior but also the exterior of the ride will change completely.

Bob Chapek, Chief Executive Officer of Disney, describes the ride as “a high-speed, hyper-kinetic adventure where guests will team up with Iron Man and their favorite Avengers”.

The Iron Man Roller Coaster will be part of the new Avengers Campus of the Walt Disney Studios Park.